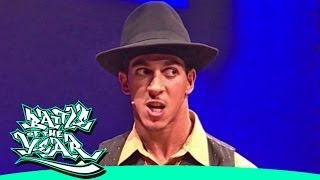 Description: ROBOT DANCE - BOTY 2006 - SALAH (FRANCE) - SHOWCASE SPECIALThe Battle Of The Year has come a long way. Who would have thought that BOTY would go from starting out in 1990 in a local youth culture centre with 500 hard-core fans to an arena packed with more than 12,000 roaring spectators and b-boy crews from all over the world?BOTY has ...