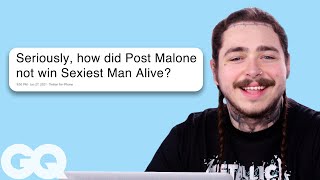 Description: On this episode of "Actually Me," Post Malone goes undercover on the Internet and responds to real comments from Twitter, Reddit, Quora, Wikipedia, Facebook, and more. Where did his nickname come from? If you're a kid from the suburbs, what should you rap about? What does Post Malone mean when he says he was "Feeling Whitney"? Find out all that ...