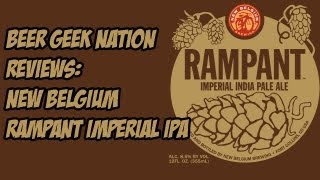 Description: A burly and bitter Imperial IPA, Rampant pours a pure copper and carries the sheen of a rightly hopped beer. The Mosaic and Calypso hops bring stonefruit to the front seat, and the addition of Centennials nod towards citrus for a well-rounded aroma. The taste expands these hops with heavy peach tones and a profoundly bitter bite. There is some ...