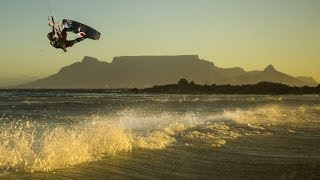 Description: For more kiting action, check out http://win.gs/1aXUVRMKevin Langeree (Holland) owned the skies above Big Bay in Cape Town on Sunday 2 February to walk away with the crown as Red Bull King of the Air for 2014.Langeree bettered countrymen Ruben Lenten (second) and Steven Akkersdijk (third) in the closely-fought final in front of a 12 000-strong crowd.That ...